Home/General/Diving into Division Part 1
Previous Next

Over the past few days I have had several discussions with 4th, 5th, and 6th grade teachers about the operation division. Division is often viewed as the most difficult of the 4 operations for students to master, and I am constantly looking for ways to help teachers better communicate how to divide.

In my initial discussion with a 5th grade teacher, we were looking at how the book presented a lesson on division. For a couple of reasons, we were not happy with how the book examples worked, although the strategies were very appropriate. So we decided to adjust the examples to work better for us, and proceeded with the lesson.

Before we go further, it is important that you are familiar with the Area Model of multiplication. If you are not sure what that is, take a moment to read my article on multiplication, which can be found here: https://mainemathteacher.com/2017/11/22/multiplication-multiple-methods/

The problem we will explore is 52 ÷ 4. To start we will set up an area model, much like was done in multiplication. The picture looks like this:

It’s possible that a student may recognize that the length of this rectangle (and the answer to the division problem) is 13. More likely, however, is that students will need to work with smaller numbers. So I will instruct them to give me a mulitple of 4 that is smaller than the 52. For this example, let’s assume the student gave a value of 20 for that multiple of 4. The revised picture will now look like this: 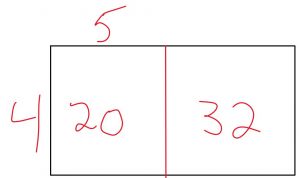 Finally, we need to find how many fours go into the 32, and then add to that number the 5 we already have recorded. The final picture looks like this:

After having the students help me with this problem, I then set up the same problem and had them on their select a multiple of 4 to start with. Students picked numbers such as 8, 12, 16, 24, 32, 36, and 48. The beauty of this method which the kids could see is that it didn’t matter what multiple of they started with, they still had a final answer of 13.

Once students have a good grasp of this pictorial method, I would move to a modified traditional algorithm. It is setup in the traditional way for long division, but then we do something different. Let’s look at 52 ÷ 4 again.

Then I ask the SAME question as I asked before – what is a multiple of 4 that is less than 52? Assuming we do the same answer of 20, we subtract out the 20, and also in the same step record how many 4’s I have subtracted. It looks like this: 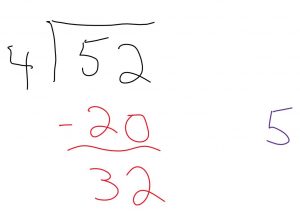 The student now may recognize that 32 is a multiple of 4, or they may choose to subtract out 20 again. It doesn’t really matter in terms of their solving the problem. We will assume in our example that the student recognized 32 as a multiple of 4, and so they can finish up the problme as shown: 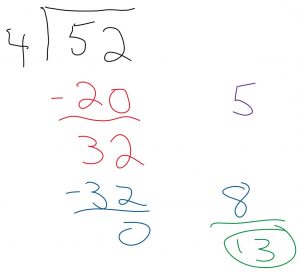 The beauty of this modified division method is that if students have practiced the area model enough to understand it, then this method becomes much easier for them to do and understand. Furthermore, down the road when the student is ready, they can begin shifting to the traditional model and likely be more successful.

In Part 2 we will look at the modified algorthim more closely, and explore it’s value over the traditional algorithm. 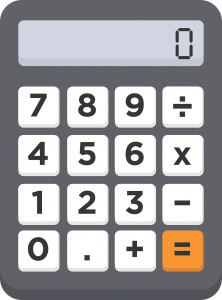