To the surprise of many people, there are multiple methods for multiplication. Every so often, a “new” fad in doing arithmetic makes the rounds on social media. One that is currently going around is termed the “Multiplication – the Japanese Way”.  Here’s one video that shows the process:

Professor Puzzler (www.theproblemsite.com) has an interesting article on this method that is worth taking a few minutes to read.

In the last few days, as I have seen a resurgence of this video on social media, I have put the question out to people sharing it: Why does this work?

As a mathematician, a mathematics teacher, and a mathematics coach, I am convinced that it is not enough to teach students “methods” that solve a problem without any understanding of why that method works. Too often I see students, who have memorized a procedure without comprehension, then forget a minor step in the process, and don’t understand why, for example, 23 x 17 does NOT equal 184 like the student thought in the example below. 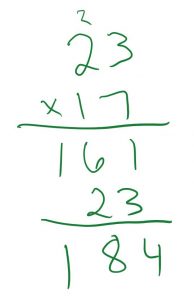 This lack of understanding of the process leads to frustration among students, and often to a feeling of “I don’t get math” and “I can’t do math”.

The problem becomes even more severe when students move from elementary school, through middle school, and into high school. In Algebra 1, students learn to multiply algebraic expressions. Students often fail to understand why the multiplication they learned in Arithmetic works. This in turn makes it even harder for them to be sucessful at multiplication in Algebra.

With that said, let’s look at WHY multiplication works.

Multiplication – where it begins

Multiplication really begins when we introduce students to the idea of “skip-counting”. For example, when students skip-count by twos, as in “2, 4, 6, 8, 10, 12, …”, they are starting the process of thinking of things like “3 groups of 2” when they count to the third number in the sequence. Although we may not use the word multiplication at this point, this becomes the underlying concept that is built on in the future.

When students are first introduced to the word “multiplication” it typically is in the context of groups. For example, the problem 3 x 5 might be explained as having 3 groups of 5 objects. Students will often even form these groups with small objects, and then count how many there are in all. A picture of this might look as follows: 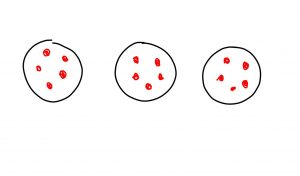 As students get more comfortable with this idea of “groups” of objects, we want to transition them to looking at ‘arrays’. An array that would represent this same multiplication problem would simply be a picture showing 3 rows, each row consisting of 5 objects. Here is an example of what that might look like: 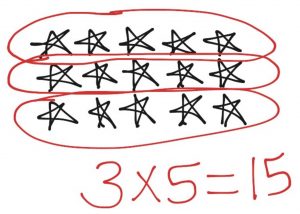 As a side note, some might ask why couldn’t we also represent this as 5 rows of 3 objects. After all, isn’t that still 15 objects? While this is a true statement, there are some subtleties at work here that we want to prepare students for. When they reach high school, they will likely start looking at things called matrices. A ‘matrix’ is an array of numbers. The ‘dimensions’ of the matrix are given in the form ‘row by column’. So, as an example, the image below shows a matrix with dimensions 3 x 5. 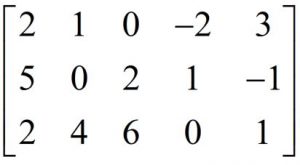 By focusing on the multiplication array as always being row by column, in that order, it makes the transition to matrices in Algebra an easier transition.

We will gradually transition students away from drawing pictures, such as stars, to representing the array by using a grid. Such a picture is shown below:

Once we reach this point in student understanding of mathematics, we can also relate multiplication to the area of a rectangle. After all, if a rectangle has a width of 3 and a height of 5, the area is 3 x 5 = 15. This progression allows us to more readily look at multiplication involving both decimals and multi-digit numbers. Below is an example showing the multiplication of 3.5 and 4: 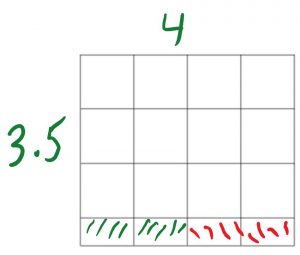 In this diagram, one can count the boxes that make up the product. There are 12 complete boxes, and then the green shaded boxes together create another box, and finally the red shaded create one more box, for a total of 14. Thus, the product of 3.5 x 4 = 14. 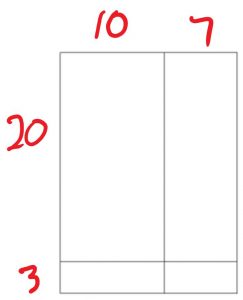 The large rectangle has a height of 23 and a width of 17. In order to represent the multiplication, the rectangle has been partitioned based on the place value of the digits in the tens place and the ones place. Then, we can find the area (or the product) of each smaller rectangle and add them up to get the total area. The first row has a rectangle of dimensions 20 x 10, which equals 200, and a rectangle of dimensions 20 x 7, which equals 140. In the second row we have dimensions of 3 x 10, which gives us 30, and finally 3 x 7 which gives us 21. 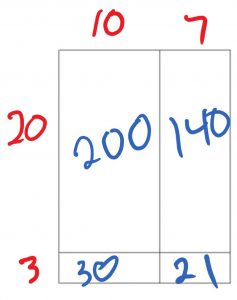 Moving towards the algorithm

In order to make the process more efficient, we can introduce students to the same process, keeping track of the place value. For example, setting up the problem initially looks just like the traditional algorithm we all know: 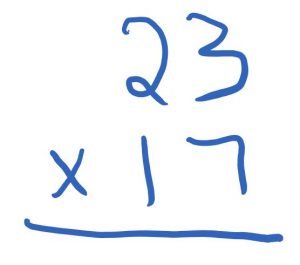 Now, start by multiplying the units digits, which gives us 21 as shown in red: 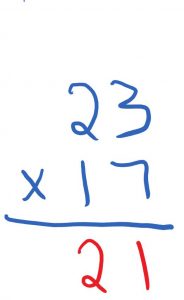 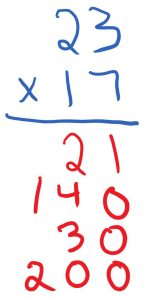 Adding these up gives us the product of 391.

Notice how similar this method is to the traditional algorithm, but also notice that it connects easily to the area model used above. The biggest problem, in my opinion, with the traditional algorithm is that students do not understand why it works. As such, they are simply memorizing a series of steps for which they have no comprehension. If they forget, for example, to “write the zero down”, they don’t even realize they have made an error. On the other hand, if they have a clear picture of the area model first, and then relate the area model to this written out process, they are focused on multiplying 10 by 3, rather than writing a zero down and multiplying 1 by 3.

Of course, as students become comfortable with this process, we will move them towards the traditional model, but they will have a much greater comprehension of how the method works.

The final step in this multiplication model is the multiplication of algebraic expressions, such as this problem: (x +2)(x + 5). You may remember “FOIL” (First, Outer, Inner, Last) from your algebra courses, but why does that method work? Consider instead if we set up this problem like the area model above. The picture looks like the following: 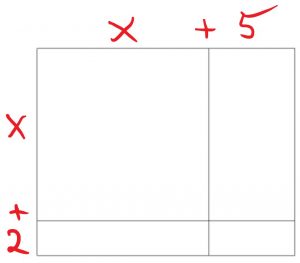 Following the steps of the area model above, and remembering that x times x is x squared, we quickly get the following diagram: 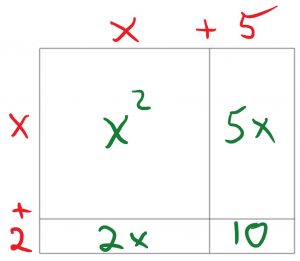 Now, just like in the arithmetic problem, we add the individual pieces:

Some people may argue that this method is no easier or better than using FOIL. The difference, in my mind, came about back in 2003. I had the first group of students come into my AP Calculus class that had been taught this area model for multiplication. On the first day, I gave them a problem that asked them to multiply a cubic equation (an equation with an x cubed term, x squared term, x term, and constant) by a quadratic equation (an equation with an x squared term, x term, and a constant). This problem is not even POSSIBLE to do with the FOIL method.

These students, however, simply drew a large diagram with 3 rows and 4 columns, filled in the terms on the side and top of the diagram, and proceeded to find the product by finding each individual product. They had no hesitation about doing so, because they understand the CONCEPT of multiplication, and were not simply relying on memorized procedures that didn’t make sense.

So what about the ‘Japanese’ Method?

The so-called ‘Japanese’ Method in the video at the top is simply another way to try to do a shortcut in multiplication, It actually works the same way as all the other methods. It’s shortcoming is that it does NOT readily work for an algebraic expression.

To illustrate the method, let’s suppose that you wanted to multiply 2 x 3. You draw 2 lines diagonally in one direction, and 3 lines in the other like shown: 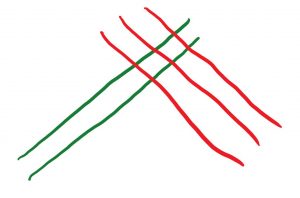 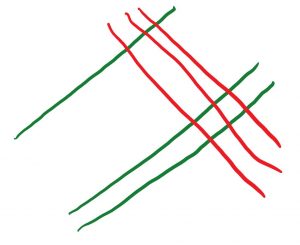 We have to keep track of the tens place versus the ones place, and remember that the single line represents the tens place. Thus, in the upper part of the diagram we have 3 intersections, but it has to count as 30. The lower part is still 6, for a total of 36.

We can continue to expand this diagram. The problem is keeping track of what place value is in each group of intersections. Imagine multiplying 123 x 856 with this method. The diagram would be: 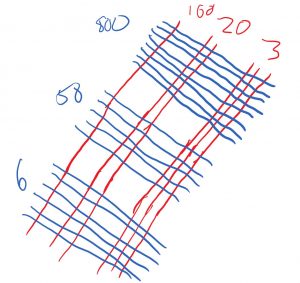 I don’t know about you, but I’m not interested either in counting all of the intersections, nor keeping track of the place value of these numbers. This method, although a neat way to show multiplication with small numbers, is not all that useful on larger numbers. Here is the area model for the same problem: 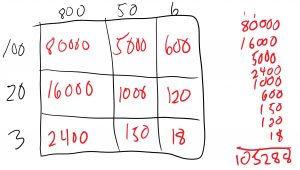 Even this is a little lengthy, but I submit far faster than the “Japanese” Method.

Ultimately, as said earlier, students need to understand WHY the method we teach works. Teaching a method with the reason “It just works” sets students up for failure either now or in the future.

What other methods do you use to teach multiplication? Share them in the comments below!